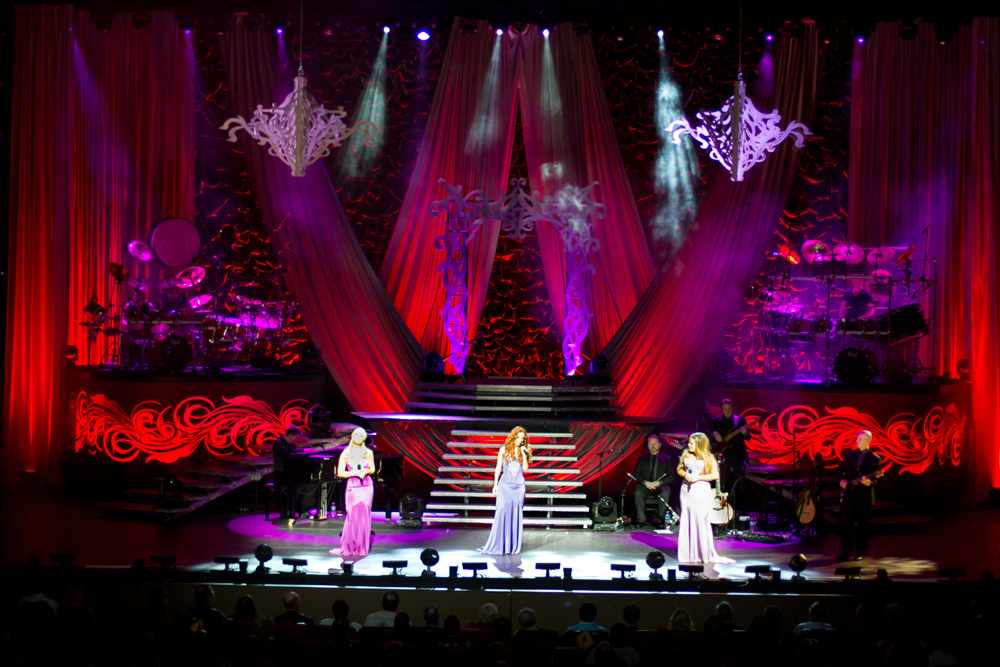 The all-female musical ensemble Celtic Woman has been nothing short of a musical phenomenon since first forming in 2004. Album sales in the millions, popular television specials and sold out shows around the world attest to that. Their current tour sees the Irish musicians playing an ambitious schedule of dates across the US, Europe and Asia beneath a MAC rig that includes Martin Professional’s new MAC Aura LED wash light.

Lighting designer is Tom Kenny who has worked with the group for several years. “They fit perfectly in with all my other clients as they're standard of show is brilliant and the music is very emotional,” he says. “Ask any of their millions of fans - the show flows like a well-oiled machine.”

Upstaging
Lighting supply for the tour is by Upstaging who have also supplied Martin MAC 700 Profile™ and MAC 700 Wash™ fixtures for the show.

“It was the first time that Upstaging worked with the tight knit Celtic Woman production,” Kenny says, “and they blew us away on all levels with their customer support, exceptionally well-maintained equipment and first-class service from Paul Costa and John Huddleston. I’ve got very high standards when it comes to lighting vendors and they impressed me far and beyond.”

Kenny says he was fortunate to get a look at the Aura from Gary Mass and Brian Friborg at Martin US before they were launched at PLASA last September. “Paul Costa at Upstaging then asked me if I’d like to use the Aura and I jumped at the chance,” he said.

MAC Aura
Kenny uses the MAC Auras to wash the scenic drapes, set and band in color, shades that also complement the musicians’ striking wardrobe. He comments, “Celtic Woman’s unstoppable Costume Designer Synan O’Mahony comes up with absolutely stunning dresses and ball gowns and the color and look of the costume are as much a part of the design as Tom McPhilips’ beautiful set.

“I’m a true colors person so I’m amazed at how close to the color the Auras can get with beautiful white looks and deep reds and oranges.”

The MAC Aura is unique in another way as well. It incorporates two independent color systems in one luminaire – multicolor beam LEDs and a backlight LED lens array. The two color systems can be mixed and matched to create new looks and effects.

“We have a lot of cross stage moves in transitions so we have the Aura backlight effect on in blackouts,” explains Kenny. “It works like a treat. It’s a strange effect that the eye loves.

“They’re also very quiet,” he continues, “so this helps with those ‘pin drop’ moments. I’ll spec them on everything now.”

The Aura is compact and weighs in at just over 12 pounds, a size that has its own benefits. “The sleekness and lightness of the body fits in well as the show varies from big theatres to multiple runs in arenas and smaller theatres, so they’re never a problem.”

Kenny calls the show “very classy and stylish” and expresses his appreciation in being part of such a professional team. He acknowledges “genius programmer Mike Appel and the tour’s Lighting Director Jim Mustapha, who are always an incredible force on their own; lighting techs Jim and Joe; Company Director Scott Porter and Scotty Ross; extraordinary Musical Composer and Director David Downes, as well as Choreographer Darren Crosbie; the Celtic Women - Mairead, Chloe, Lisa and Susan; and the band and choir who patiently help us through the plotting of this extraordinary show.”

The Celtic Woman tour has been very well-received with the North American leg kicking off in early February in the US. The tour will play dates in Europe beginning in May before heading to Japan later in the year.