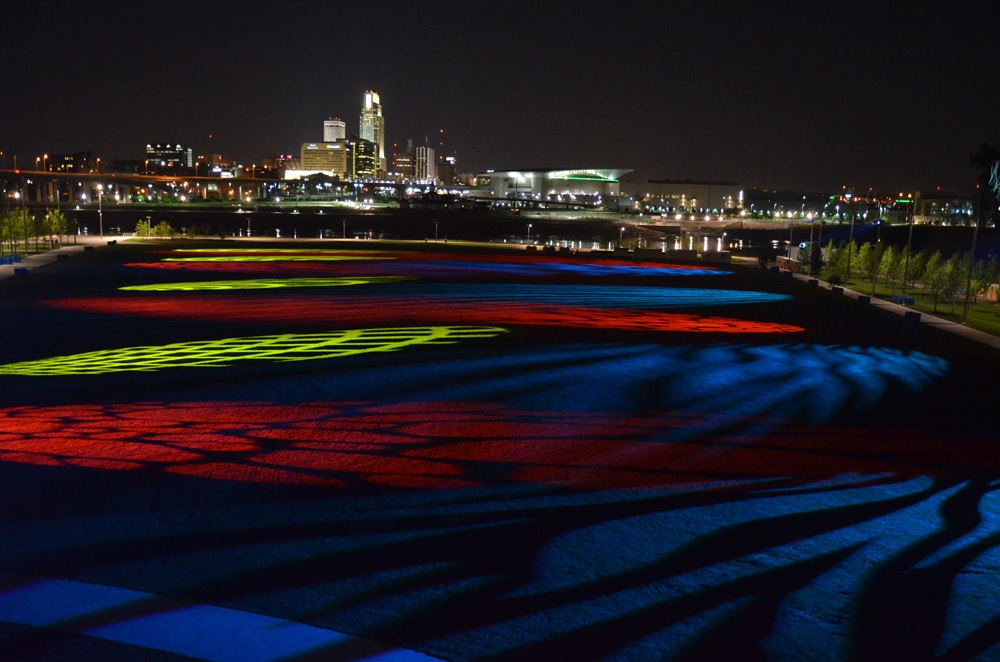 Inspired by European baroque knot gardens, the ever-changing light environment showcases choreographed sequences and patterns every half hour. Additionally the piece interacts with visitors via thermal cameras and analytics program to track and “play” a series of simple, intuitive and fun games. The motions of park visitors can control the lighting and allow participants to be tracked with spotlights. The light show has been calibrated to utilize a different color palate for each of the three “park seasons” of the year: White, Brown and Green, coinciding with the snow, dormant grass and green grass states of the lawn.

“The city was originally expecting an artwork something along the lines of a laser light show, but the potential for a more ambitious interactive light environment was too great to pass up. I wanted a layer of activity that would engage visitors’ curiosity in the large space,” stated Corson. “I have been very impressed by the Martin lights and how they ended up meeting the power, brightness and area needs of this piece.”

A total of 16 Martin Exterior 1200 Image Projectors with custom gobos mounted on 35-foot poles and four MAC III Profile fixtures with custom gobos in Tempest enclosures mounted on 14-foot poles surround the 5-acre park to create the visual experience. A Martin MAX Module Cerebrum combined with a custom motion control system by David Beaudry of Beaudry Interactive runs the timing and interactive lightshow from a weatherproof station in the park.

Visual Terrain, Inc. worked with Corson to implement his vision. “With a project of this magnitude and a limited budget, we were concerned about providing meaningful coverage for the exhibit,” stated Lisa Passamonte Green, CEO and Principal in Charge at Visual Terrain. “We tested many products in terms of brightness, pattern capability and movement prior to selecting the Martin fixtures. The combination of their brightness, exterior housings, pattern and texture movement, and adjustability won us over. We have a long history with Martin and continue to come back to them when they fit the project application. We look forward to using Martin fixtures on our own future projects and those we do with artists such as Dan.”

The biggest challenge of the project, according to John Jenkinson of Bandit Lites was the sheer size of the space. “On the fixture side, every piece spec’d for this project was a perfect fit,” Jenkinson says. “The MAC 1200’s were one of the few tools that could have pulled off what we planned and the brightness and colors have performed perfectly.”