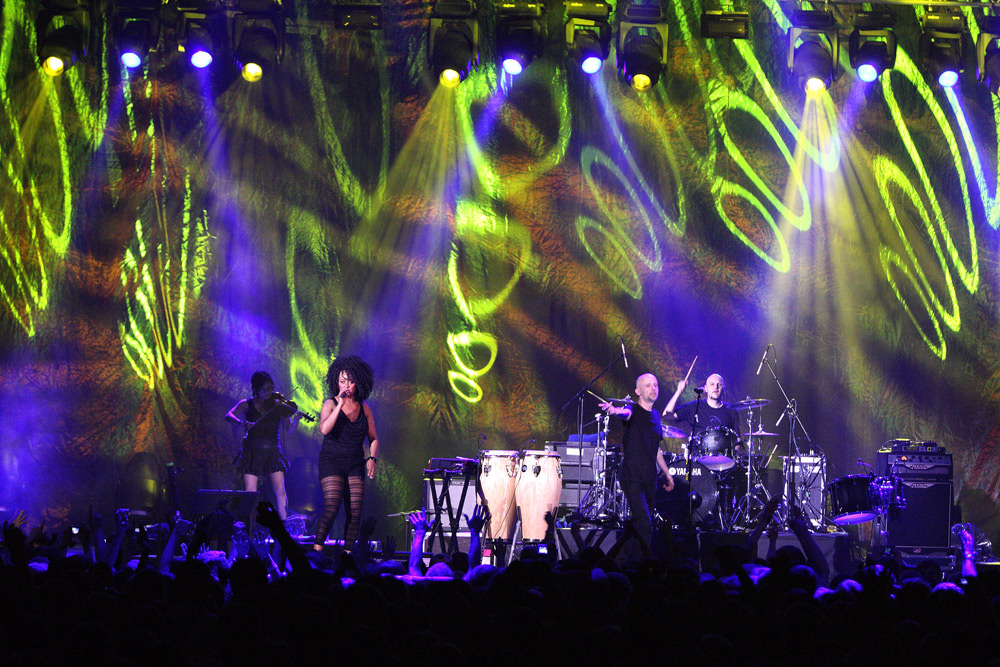 DJ sensation Moby released his latest album “Destroyed” in May then promptly hit the road on a world tour in support of it. His June 7th show at the Yubileyny Sports Palace in St. Petersburg was one of the highlights of the tour with lighting designer Stuart Farrell opening up a new realm of lighting impression with the help of Martin fixtures.

Blast of positive energy
The biggest rental company in the area, Euroshow, supplied the lighting and sound equipment for the event. “Moby’s performance was one of the best I’ve seen in years,” commented Alexander Blednykh, owner of Euroshow. “We’ve worked with the singer before but his latest show left a lasting impression. Today’s audience doesn’t want to be confronted with deep issues; they come to a concert to raise their spirits, and Moby understands this. But the greatest thing is that he gave a splendid light show, a show that I will never forget; a show that changed my view of lighting.”

Stuart Farrell – lighting ace
The brilliant visuals were due to the talents and creativity of lighting designer Stuart Farrell who has his own understanding of color and effect, and talent for creating atmosphere. Unique to his designs is that he never uses LED – neither lighting fixtures nor screens.

“He can work with lamp fixtures at such a high level that he does not need alternatives,” says Alexander Blednykh. “His brilliant performance proved demonstratively that, in a show, light is as important as sound. It was the first time that I really saw how lighting fixtures could perform and I am still full of impressions. As an example, the designer used backdrop light-reflective fabric as a canvas for his paintings and with the help of MAC III Profiles created the illusion of a star sky.”

From an installation point of view, the setup was quite simple with four trusses fixed at different heights, one front, two middle and one upstage, with sixteen Martin fixtures placed on each (washes and profiles).

“Using a simple set of lighting instruments the designer created an interesting effect that I had never seen before,” recalls Alexander. “Combining light from the upper and lower trusses with flood light from lateral fixtures, he framed the backdrop in pulses of dynamic lighting. When Stuart then projected the MAC III Profile beams onto this ‘screen,’ it was quite unbelievable.” Alexander says that after the show, half the Euroshow staff was sad and the other half delighted. The first realized they might never see anything like it again; the second was thrilled to have experienced such a show.

Flawless performance
Most lighting for the show was handled by Martin fixtures: MAC III Profiles™, MAC 2000 Washes™ and Atomic 3000™ strobes. “I can say that today the MAC III Profile is the most outstanding fixture in its class. There is really nothing better,” concludes Alexander Blednykh. “We are very pleased with their flawless work and performance. They are extremely reliable and never cause problems. They just do what they should!”