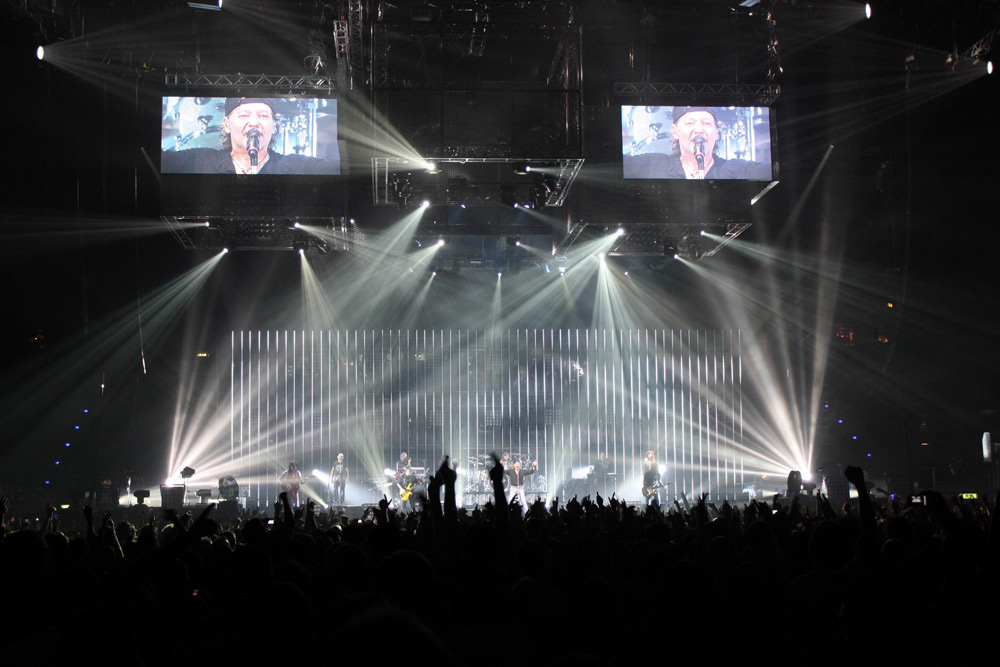 “The Profiles and Performance are the only spots on the show so they are very busy in all cues and placed to give me full coverage of stage, scenery and audience,” explains Pinna, who has served as Vasco’s LD for years.

Pinna has the wash fixtures well integrated as backlight for the band with washes along with MAC 700s dedicated to lighting scenery, a big part of the show. The Martin Stagebars are rigged over the audience in clusters of 8x2 along with MAC 700 Washes.

“This was my first time using the MAC 700s indoors (Vasco’s stadium tours in 2007 and 2008 featured over 100 MAC 700s) and I was completely satisfied with them,” he comments. “For indoor touring I believe there are not many fixtures that can compete with them in terms of features, reliability and weight.”

Pinna calls the MAC 2Ks “classic” lights that give him that extra power when needed. “They even blend perfectly colorwise with the rest of the rig so I'm completely satisfied with them,” he says.

Pinna is quite a fan of the animation feature on both the 700s and the 2Ks. “Using it without gobos is really cool,” he states, “especially on audience cues. The zoom in the 700s is really good and is used on many cues.”

And, as the show is rock 'n' roll, Martin Atomics played an integral role. “It's the only choice on the market in terms of a professional strobe,” he says of Martin’s industry standard strobe. “I'm fully satisfied with the reliability of the whole system.”

Pinna thanks the crew for the great job they do to keep everything working perfectly. “Limelite is no doubt among the few professional lighting companies in Italy capable of dealing with such a job,” he concludes.