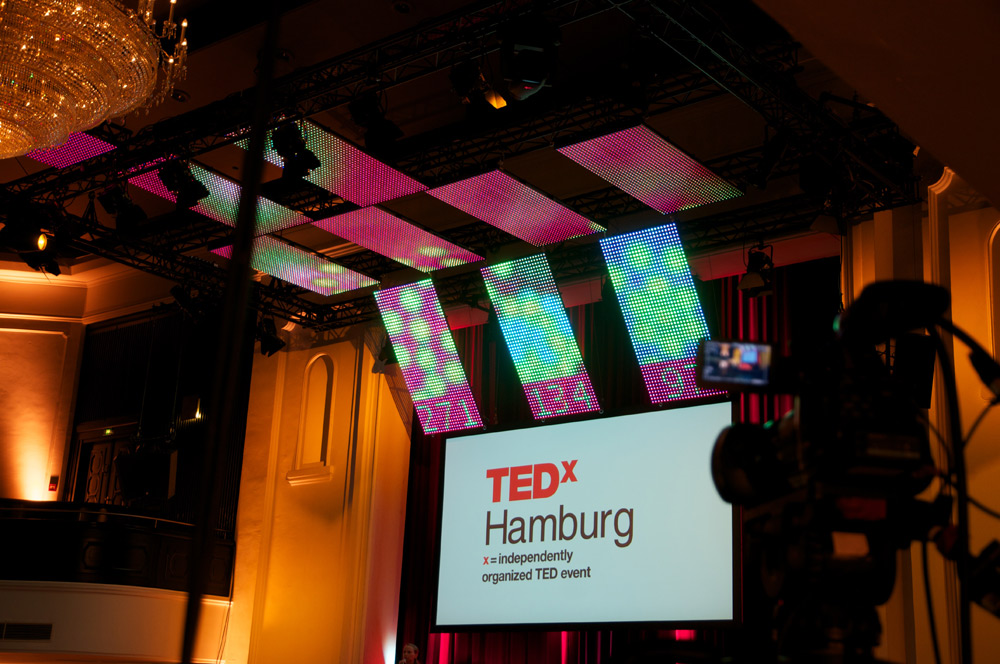 What a Tweet! Martin LED Panel Communication at TEDxHamburg

The event, part of the popular TED nonprofit organization’s “Ideas Worth Spreading” public speaking program, took place at Curio House in Hamburg under the theme “Realities Rebuilt.” Some 22m2 of LC Series LED panels were installed in the ceiling of the conference space and used to display live data from the global Twitter network related to TEDxHamburg. Also involved were Martin MAC 301 Wash™ LED moving heads used for backdrop illumination, and Martin MAC 350 Entour™ LED moving heads used to illuminate TEDxHamburg logos at key locations throughout the conference area.

TWEETx
The TWEETx installation, created by anOtherArchitect Berlin (anOtherArchitect.com) in collaboration with Kollision (kollision.dk) and Martin Professional, visualized tweets containing specific keywords by continuously scanning and filtering Twitter's data stream. The selected tweets were represented on the LED panels as dynamically moving bubbles that sought like bubbles carrying the same keywords. The idea was to create a shared and engaging experience that encouraged people to actively debate a subject.

Twitter comments influence graphics in real time The installation was based on a generic software platform that searched for keywords within a tweet and combined it with metadata (tweet-user, time code, geolocation, language, etc.) and then visualized the findings on the basis of a custom real-time graphical engine. During the conference, the installation searched for #TEDxHH, #TEDx, speakers’ names and language of the tweet. As people posted comments about the web-streamed event, the lighting system reacted to specific parameters such as language, geo-location, and volume of Tweets. The data, which is usually invisible, essentially created a live window on the data layer.

Tweet bubbles
The conference host encouraged the audience to tweet during the conference and as immediate feedback, the audience experienced a visual representation of their tweet move above them. The tweet bubbles, portrayed in bright colors to indicate language, traveled across the LC panels above the speakers. Here they grouped in relation to keywords which gave insight into the communication and activities within Twitter. The slowly growing groups of bubbles gave an indication of the most popular keyword over time, and were articulated by the host, who also disclosed how many tweets each group represented during breaks.

TEDxHamburg (tedxhamburg.de) was an independently organized TEDx event, produced by RedOnion (redonion.de). TWEETx was produced in dialogue with RedOnion. The functionality and layout of the installation was conceptualized by anOtherArchitect and Kollision. Martin Professional was responsible for mapping the visual content while Kollision created the visual engine that scanned Twitter. All Martin lighting gear was installed by Neumann & Müller.

anOtherArchitect
anOtherArchitect (aA) is an internationally operating urban and architecture design studio focusing on sustainable solutions (green&sexy), collaborative participation processes (co-creation) and digital manufacturing methods (do-lab). In 2007 anOtherArchitect was founded by Daniel Dendra in Berlin and Moscow. In 2008 Daniel Dendra was nominated for the International Chernikhov Prize. aA ́;;;;s work was exhibited widely at locations such as the Royal Academy Summer Show 2008 (London), the International Model Festival in Budapest in 2008, Milan Furniture Fair 2009, Furnex Cairo 2009, Parametric Prototypes (Xian - China) 2009, +20 Cairo 2010 and the Venice Architecture Biennale 2010. Daniel Dendra was lecturing by himself at the TEDx conference in Berlin in 2011. For more information please visit anOtherArchitect.com