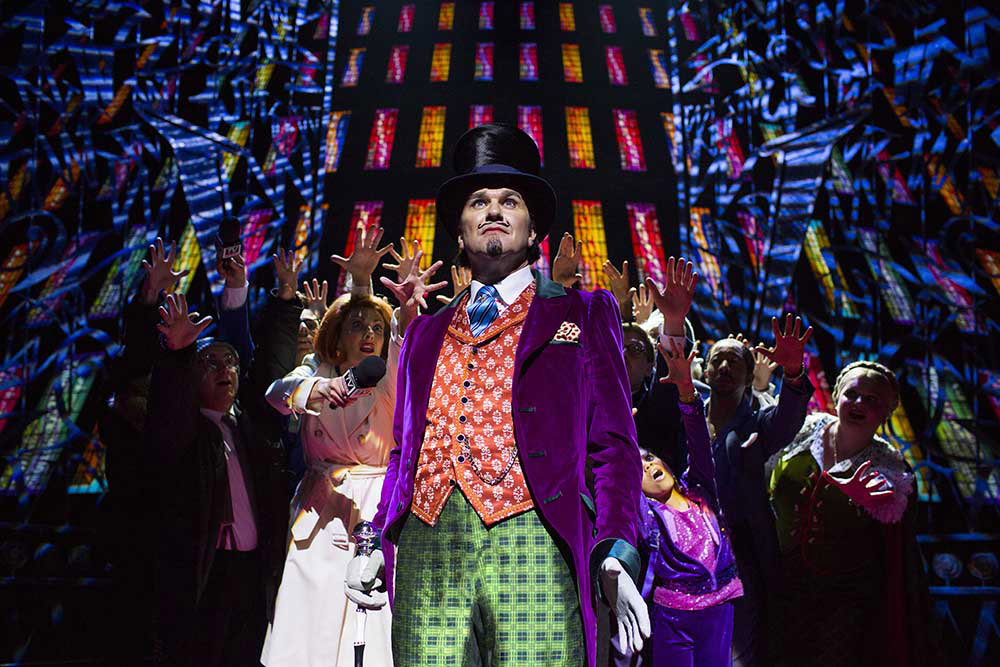 Entertainment lighting specialist White Light was recently chosen to supply lighting for the new musical version of Charlie and the Chocolate Factory on London’s West End with Martin MAC TW1 and MAC Aura moving heads playing a key role in the visual design.

Charlie and the Chocolate Factory opened earlier this year at Theatre Royal Drury Lane to critical and public acclaim. Directed by Sam Mendes - returning to theatre after directing the hit James Bond film Skyfall - Charlie features an A-list creative team including Designer Mark Thompson, Projection Designer Jon Driscoll and Lighting Designer Paul Pyant, who has collaborated with Mendes regularly during and since his time at the helm of London’s Donmar Warehouse.

Pyant, working with Associate Lighting Designer David Howe, specified a modern lighting rig using moving lights and LED lighting fixtures rather than color scrollers to provide all of the color changing in the show.

The load-in for Charlie began three months before opening - “when there was still snow on the ground outside,” as Senior Production Electrician Gerry Amies notes - with White Light staging equipment deliveries from the company’s London base to suit the fit-up schedule. Pyant’s rig includes Martin MAC TW1s and MAC Auras and a host of other automated lights, as well as a selection of more traditional fixtures. Lighting was programmed by Jim Beagley and video by Emily Harding.

“Working with White Light was fantastic because the wide range of equipment they offer allowed us to pick particular products for specific purposes, while also allowing us to aim for the quietest rig possible, something all involved with the show were keen to achieve,” notes Paul Pyant. “For example, we knew that we wanted the early scenes to have a very traditional, tungsten-like feel, and the Martin MAC TW1s provided that. But we also knew there would be moments in the show where we wanted really sharp bump changes of level or color, and for that LEDs are unbeatable.”

“We’ve had great fun with Martin’s MAC Auras in particular,” David Howe adds. “These offer a great beam and a fantastic range of colors, but they’re also tiny, so we’ve been able to sneak them into under-box positions where you wouldn’t normally be able to fit a moving light - indeed, where you can only just fit a Source Four. They’ve worked really well from there, as re-focusable cross lights and roving specials.”

The lighting team also praised White Light for their responsiveness, flexibility and quality support. “When we call with a problem, there’s no hassle,” Howe notes, “just re-assurance that the problem will be solved. If there’s a sudden need for something to achieve a new effect, it’s great to know that it’s only in Wimbledon and so will get to us quickly. When you’re working on a show of this scale, the demand is very high to get everything just right. Having that level of support from White Light is invaluable.”

“It’s been a great pleasure working with Paul, David, Gerry and the whole Charlie team,” comments White Light’s Hire and Technical Director, Dave Isherwood. “They’ve known what they wanted to achieve and trusted us to help them deliver that. With its extensive use of LED fixtures and lack of scrollers, this is perhaps a turning point in the evolution of lighting rigs - a milestone as big as the first shows White Light supplied scrollers to back in the 1980s. We at White Light are delighted to be helping evolve the use of lighting technology in theatre once again.”

“It’s been a long time in the making, ” comments Paul Pyant, “but with hard work from everyone in the theatre, and great support from White Light, we got there. I’m very pleased with the result - I think we have a great show, and one that audiences seem to love.”

White Light also supplied the lighting and technical production for the spectacular opening night party, which took place at the Grand Connaught Rooms. The company’s Events team, which specializes in bespoke event production, ensured the new show received a deliciously colorful welcome, which hit the spot with guests.