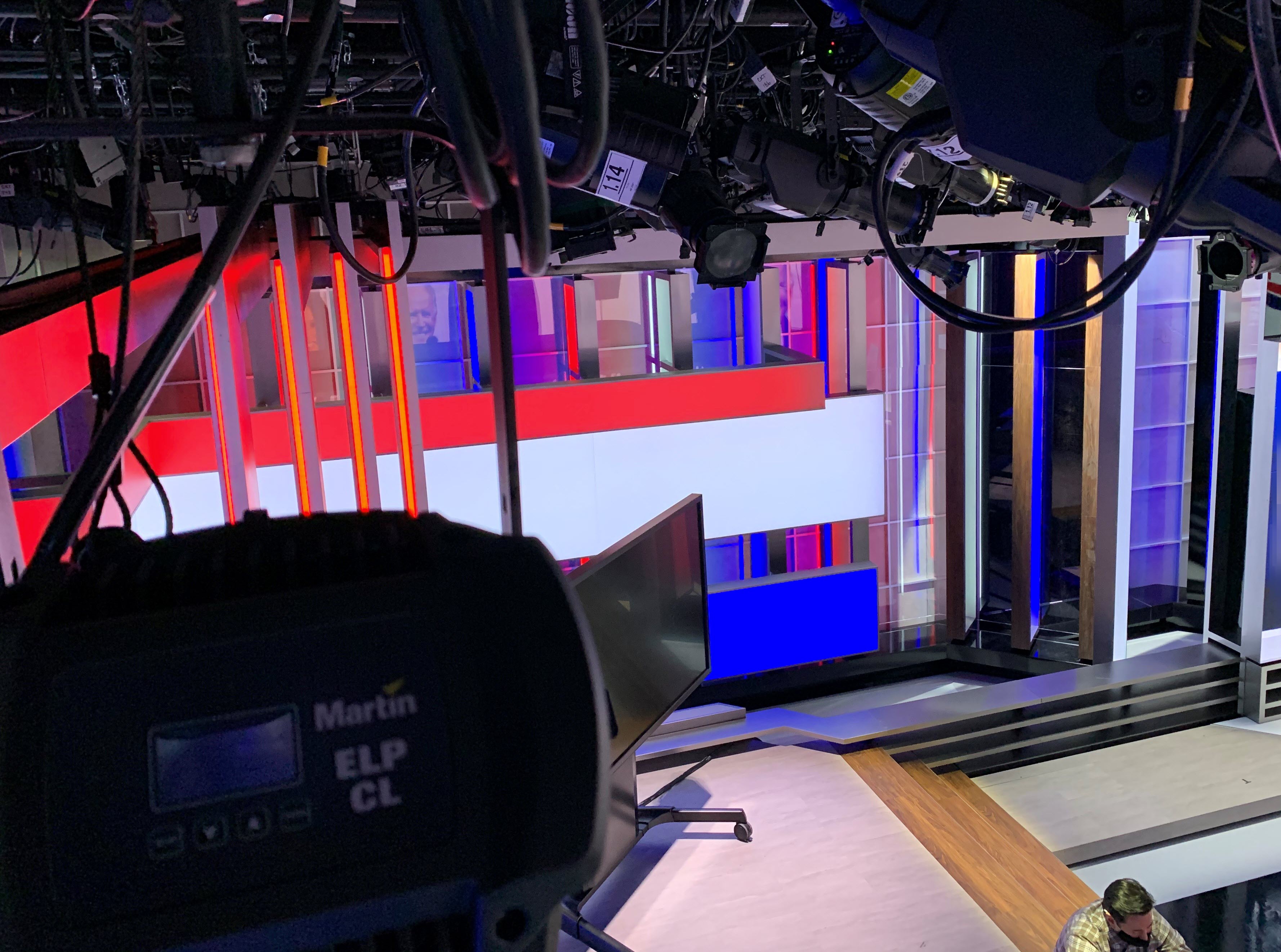 When anchor Shepard Smith joined CNBC in July 2020 to host The News With Shepard Smith, the network took the opportunity to completely renovate its 3,600 square-foot Studio B set. The new set is dominated by two massive LED video walls, including a five-panel display opposite the host’s desk that can be used to show multiple video feeds for remote guests and correspondents or combined to display one large image.

Additionally, the center screen can be moved up to 17 feet away from the wall via a motorized arm to draw focus to a specific element. In order to complement the light from the displays with precisely-calibrated illumination and reduce electricity costs, CNBC opted to replace the studio’s incandescent lighting with a modern LED solution. The network hired Ferri Lighting Design & Associates to equip Studio B with a complete Martin lighting solution including more than 200 Martin ELP CL ellipsoidal profile fixtures and 50 RUSH PAR 2 CT Zoom wash fixtures.

“We had previously talked about converting Studio A to LED, but budgets and COVID put that project on the back burner,” said Bruce Ferri, owner of Ferri Lighting Design & Associates. “When the Studio B project came up, I decided to move forward and make it an all-LED installation. The big reason is that most of the set is dominated by displays. When you use incandescent light, you have to color-correct the displays down to 3,200 degrees, but most displays are not designed to operate at that color temperature. The Martin fixtures allow us to work at a higher color temperature to match the displays.”

FLDA selected Martin ELP CL fixtures as the main light for illuminating talent and scenery, deploying a total of 226 in Studio B’s lighting rig. The leading color LED ellipsoidal fixture in its class, the Martin ELP CL delivers up to 6,900 lumens with a broad color temperature range of 2,000 to 10,000 degrees Kelvin and an RGBAL Luxeon Rebel LED engine for vibrant, saturated hues. A maximum Color Rendering Index (CRI) of 90 allows the ELP CL to reproduce color naturally on camera, making it an ideal fixture for television studios. Configurable for beam angles of 19, 26, 36 or 50 degrees and compatible with third-party lens tubes as well as a wide range of accessories, ELP CL fixtures offer excellent flexibility.

“The nice thing about the ELPs is that in addition to using them as lights for talent, we can use them as scenery lights because they're full-spectrum,” said Ferri. “I've done other installations where the talent lights have been variable white with no color mixing, but as things change and all of a sudden you have too many talent lights and not enough scenery lights, you're at a huge disadvantage. So, the nice thing about the ELPs is that I can use them for both.”

“The throw distances in that particular studio make using a traditional fill light impractical, because we're trying to keep all of the lighting on the grid,” added Ferri. “I don't like to hang lights down into the picture if I can avoid it, because I hate when you see lighting instruments break the plane of the set. So, in order to create a softer fill light, I turned to the RUSH PAR 2 CT Zooms. The fact that they can zoom means that we can tailor the beam spread for the throw distance.”

Thanks to the ultra-efficient, all-LED Martin lighting rig, Studio B reportedly consumes only 10% of the power used by the neighboring Studio C, where Mad Money is broadcast from. Not only does this reduce operating expenses for the network, it also eases the burden on the facility’s backup power system in the event of a power failure.

“They're set up for incandescent fixtures, so they have plenty of power, but they're still really happy with the fact that we're working at a fraction of that capacity,” said Ferri. “And whenever there's a hint of bad weather, they switch over to a generator backup so that they don't lose power, which has happened in the past. Having an all-LED rig lets them devote less of the generator power to the lighting.”

After a short stint in a temporary studio, The News With Shepard Smith broadcast its first episode from the new studio on October 28, 2020. Shortly thereafter, viewers across the nation saw FLDA’s work during Smith’s coverage of the 2020 United States presidential election.